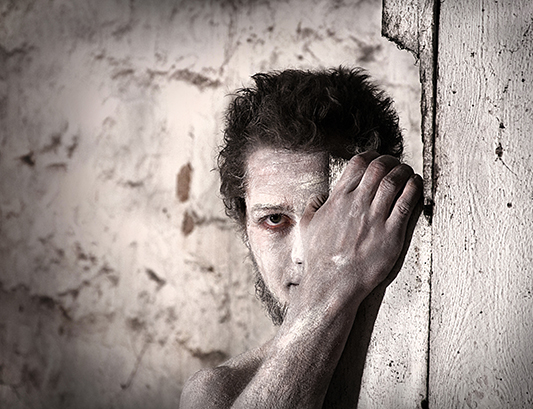 Do you wanna know why this male model is white all over his body?
Why he is creeping around in a run-down and dirty cellar?
What this photoshoot is all about?
Suffering and slavery, of course!

About “Bottom of Society”

For “Bottom of  Society”, I wanted to create pictures of slavery, hunger, thirst and suffering. Though my model is covered in white like a Maya slave in “Apocalypto”, this shooting is not especially relating to the Maya, but to slavery in general. This is a tribute to the bottom of society, everywhere on the world, caused by whoever! On the Bottom of Society The Cold preserves the Pain Ghost of a Chance

So what is it about those white slaves in “Apocalypto”? What inspired me? What were my thoughts? Go on reading and you’ll know everything!

Slavery is any system in which individuals are allowed to own, buy and sell other individuals. A slave is unable to withdraw from such an arrangement. He or she works without getting paid. Slavery began to exist before written history in many cultures. You could become a slave by birth, capture, or purchase. During colonialism, many Africans were forced to work on American cotton fields. It is also commonly known that the Egypts used slaves to build their pyramids. Owning a person is meanwhile illegal in many countries. But this doesn’t mean that it is a thing of the past. There are an estimated 45.8 million people subject to some form of modern slavery worldwide. The most common form of the slave trade is now commonly referred to as human trafficking. Human trafficking is the trade of humans for the purpose of forced labour, sexual slavery, or commercial sexual exploitation. In the movie “Apocalypto”, the slaves of the Maya were completely white because of their hard work in the limestone mines. (There actually were limestone mines.) Some historians emphasize that human sacrifice was more typical of the Aztecs than of the Maya. They didn’t live in the jungle, as everywhere were Mayan cities. And they grew corn and other agricultural products instead of eating raw meat. So all South-American aborigines got mixed up somehow. But apart from this, Mel Gibson did succeed in creating at least some resemblances with reality. Remember: A movie is always fiction, not history!

There are also a lot of positive aspects in this movie which I’d like to show you now:

1. Giving & Sharing instead of Exploiting the World

The Maya in the jungle live in gratitude for the abundance of the forest. They know you have to care for the garden if you want to eat something the following year. And they make use of everything they take instead of throwing most of it away.

© Scene out of Mel Gibson’s “Apocalypto”: “The sad man will go on taking and taking. Until one day the world will say: I am no more and I have nothing left to give.”

Copyright Disclaimer Under Section 107 of the Copyright Act 1976, allowance is made for “fair use” for purposes such as criticism, comment, news reporting, teaching, scholarship, and research. Fair use is a use permitted by copyright statute that might otherwise be infringing. Non-profit, educational or personal use tips the balance in favor of fair use.

And then, there will be bloodshed… over the leftovers? Maybe we should remember these words and act like intelligent human beings: Start caring for the world and one another!

The first part of the movie is about the village in the jungle. Children are important. Men and women love each other. Sometimes, there are some misunderstandings and some make fun of others. But mostly, they laugh. Nobody is lonely because they care for each other. Together, they are strong.

Till the suppressors arrive…
Life in the city is marked by hierarchy. There are the rich and the poor, the lords and the servants. And they are not really happy…

When a society stops caring for its surrounding, for nature as well as the poor, the weak and the strangers, it is likely to go down. This is the message of the movie. But it’s not only fitting to the Mayas (Aztecs) in the city with their human sacrifices, their slavery and criminality. Somehow, it’s also fitting to our world today. Even if we don’t have pyramids to toss people down… The main character flees, the soldiers hunt him. But only after letting go of fear and confronting his enemies, he succeeds. Now the hunters become the hunted. And when an even bigger hunter arrives at the shore (the Spanish invaders), he manages to get away to his family. He has left the fear behind and is courageous enough to start all over.

So don’t be afraid and cling to your habits, but build your own future. Not just for yourself or your country but for the whole world. As we live on the same planet and share the same destiny.

Maybe it’s not a historic movie about the Mayas. But it’s a movie worth seeing as it reminds us of our own mistakes, so that we hopefully change our ways to the better.
Mel Gibson said in an interview that he wanted the bloodthirsty Mayans to represent an American society of spectacle and waste. But showing modern Americans probably wouldn’t have been the same as it is perceived as “normal”. Of course, it’s not about blaming American society in particular. Mel Gibson is an American, so he had his own people in mind. But I think, it’s more of an universal moral struggle, a movie about the modern civilization in general.

Therefore, “Apocalypto” isn’t necessarily about telling “Hey, it is about time the white men arrived because the Mayans were bad” (even if Mel Gibson is popular for saying racist stuff when he is drunk). It’s more about finding your own face in the mirror.
At least, I hope so.

Have you seen “Apocalypto”? How did you perceive the movie?
Do you think that it is about time to change the world for the better?
Or do you believe caring is something for the weak and powerless?
No matter what your opinion is: Be nice to each other!