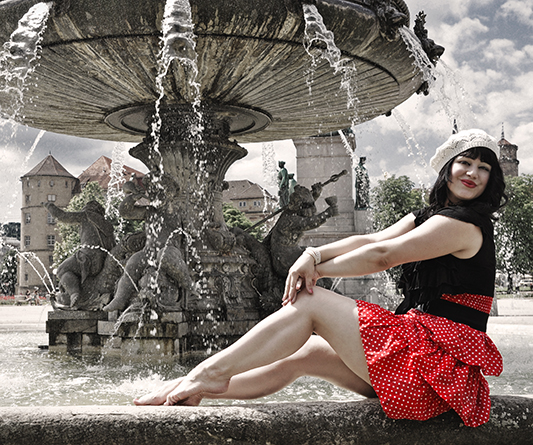 There’s some kind of pin-up feeling in these photos. Some innocent sexiness.
You know, pin-up as it was meant to be: Showing something – but not everything.
Leaving it to the watcher’s fantasy what could happen next.

And shouting indignantly: “Hey, it’s not her fault that her skirt got lifted! She is only a good girl who got in a bad situation!” A pin-up is a picture you pin up, that is to say you put it on the wall of your room, for example. But it’s not always a poster: You can put it in your pocket or onto the door of a locker. It’s something similar to those photos you find of musicians and movie stars in magazines but not quite as modern…

The term “pin-up” was first attested to in English in 1941. However the practice is documented back at least to the 1890s when burlesque performers and actresses sometimes used photographic advertisement as business cards to promote themselves. Famous actresses in early 20th-century film used similar methods. They were both drawn and photographed and put on posters to be sold for personal entertainment.

Compared to the sexy photos nowadays in advertising, the pin-ups back then were a lot more innocent. Of course, those pin-ups were sexy! Sometimes the girl on it only wore lingerie and stockings. But you couldn’t see what’s underneath. You had to imagine!

Paris is for Lovers

“Souvenirs d’Amour” wasn’t intended to be a typical pin-up shooting in the first place. My model and me only thought of using some elements of pin-up photography in our love story to spice it up. As the love story should take place in the 1950s, we chose several polka dot outfits and some poses inspired by pin-up photos. Though the shooting took place in the German city of Stuttgart, the title is French: “Souvenirs d’Amour” means “Memories of Love”. It is French because Paris is the city of Love. And love is what this shooting is all about!

Good to know: The images which were taken at Stuttgart train station show the status quo before Stuttgart 21 (a heavily-discussed railway development project). Shortly after this shooting was done, Stuttgart Main Station was rebuilt. So the photos are somehow historic!

Once upon a time there was a girl and a boy and they were in love with each other head over heels. Because there was a great distance between the towns they lived in, they couldn’t see each other as often as they wanted to. But every now and then, one of them took the train and they spent a wonderful day together.

The last time, for example, he picked her up at the station and they had a picnic in the park. And as it was a very warm and sunny day, she refreshed herself with the cool water in the fountain. He shot a lot of pictures during her stay. In this way, they could remember this special day till they would meet again. What wonderful “souvenirs d’amour”! Do you like pin-up photography? Do you prefer simple monochrome backgrounds like in a photo studio or pin-up photos in a scenery? Tell me about it in your comment!