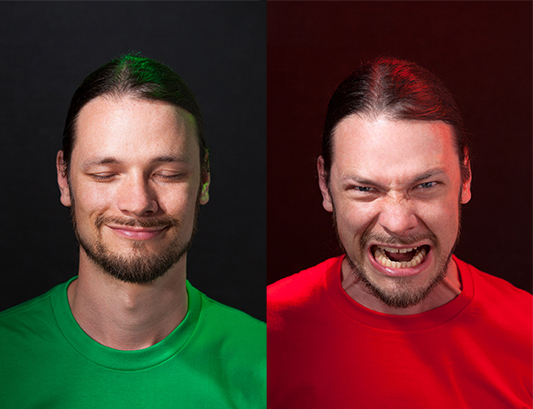 You know, this project is more than just colors and emotions!
It may not look like it but I spent really much time thinking, planning and finally realizing it in June 2017. More than you believe…        (speaking of being emotional)

I would have loved that those four photos gained more attention but maybe the people didn’t get the message or it’s still not the right time for men showing emotions, I don’t know. Maybe they would have been more popular when I took a pretty girl but then, it would have missed the point, wouldn’t it?

The Colorful Wheel of Emotions

But which colors?
I searched for the keywords “colors” and “emotions” and found the right thing to immerse myself in: Robert Plutchik’s wheel of emotions.

Plutchik was an American psychologist and studied emotions, suicide and violence. He considered there to be eight primary and bipolar emotions — joy versus sadness; anger versus fear; trust versus disgust; and surprise versus anticipation. Like colors, primary emotions can be expressed at different intensities and can mix with one another to form different emotions. So colors and emotions are naturally connected to each other. It works even the other way round: Colors can influence the way we feel. Green makes us calm. Red makes us lively or angry. Yellow makes us happy. And “feeling blue”… well… the expression explains itself. And as I thought those four colors are the most important ones, I chose red, green, yellow and blue. Making of “An Emotional Project”

I needed a man who was able to express feelings by merely using his facial expressions and I found him. I ordered colorful shirts because I wanted him to wear shirts in the matching color. I experienced with light and developed a fitting concept. And I found the results quite astonishing because the prints looked so REAL! I saw “Sadness” in the window of my model’s apartment and I really thought for a moment or two it was him! And when the light from outside hit the photos once, they started to glow as if it was actually real light on his hair!

So for me, this project was successful.
Maybe the world is ready for it one day!

© Christina Aguilera – Waiting for a Change, too!

Does it make more sense, now that you know the background story?
Do the pictures work? Do you feel anything watching them for some time? Don’t hesitate to leave a comment!