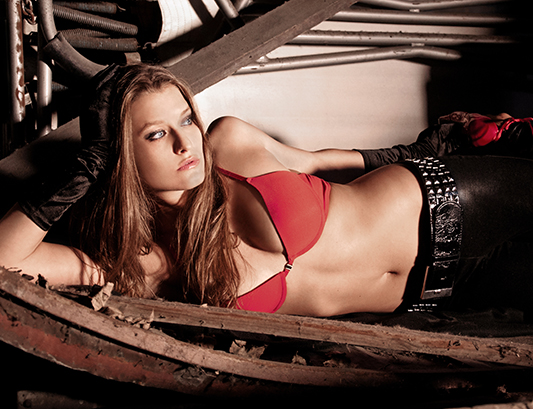 Isn’t she hot? I mean you simply do have to take sexy photos of this pretty lady!
Firstly, I wanted to paint my photos in red and black, the most sinful colors of all.
Secondly,  I decided to use an abandoned building to create a contrast to her mind-blowing sexiness. At the end, I got all I wanted: Sexy photos of a true “femme fatale”! What is a “femme fatale”?

A femme fatale is a stereotypical fictional character of a mysterious and seductive woman. Her charms ensnare her lovers, often leading them into compromising, dangerous, and deadly situations. In American early 20th century film, femme fatale characters were referred to as “vamps”, an allusion to their role as sexual vampires.

Femmes fatales are said to be villainous, or at least morally ambiguous. So they are always associated with a sense of mystification and unease. Mythical and legendary examples include Lilith, Aphrodite and Cleopatra.

Hence, a femme fatale is a strong woman who knows what she wants and how she can get it. Moreover, she enjoys her sexuality and is self-confident enough to love her body.

On the one hand, this may sound dangerous to some men out there. On the other hand, it’s also quite attractive, isn’t it? After all, nothing is as sexy as a girl who has her own opinion!

Under the model’s charm

Surprisingly, I caught my femme fatale in the act! You won’t believe it but there was indeed a person who was bewitched by my femme fatale! My model’s boyfriend was on location to help with the shooting. I have no doubt watching his girl fired his imagination.

Why? Because he stood around at different places and told me again and again: “Melly, you have to come here, she looks so hot from this perspective!”

Besides, he was kind of interested in my reflector: “Where did you get this? I want to redirect light onto her at home as well!”

As you can imagine, we laughed a lot. And I bet they had much fun at home, too. After all, there were a lot of sexy photos stimulating their fantasies…