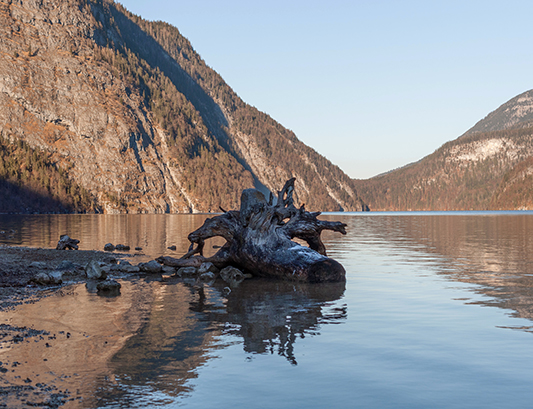 Have you heard of Königssee? This lake is quite popular with tourists. You can cross the lake by boat while listening to the trumpet’s echo…

The Königssee is situated south of Berchtesgaden which belongs to the German state of Bavaria. It was formed by glaciers during the last ice age. Being surrounded by the steeply-rising flanks of mountains, it bears resemblance to a fjord. Fall of the Meteor Due to its picturesque setting, the lake and surrounding parklands are very popular with tourists and hikers. In addition, the surrounding sheer rock walls create an echo known for its clarity. On boat tours, it has become traditional to stop and play a flugelhorn or trumpet to demonstrate the echo. The trumpeter plays along with the returning sounds, so that there seem to be as many as seven players.

There is no way to walk around the lake – you have to take the boat to get to the other side. That’s why going there in winter might be worth thinking of: Less people want to take the boat, so you don’t have to wait for hours!

I had a lovely walk through the park around the church. There was a lot of snow and ice and beautiful reflections on the water. Have you ever been to Königssee?
How did you like it?
Leave a comment and tell me about your thoughts!