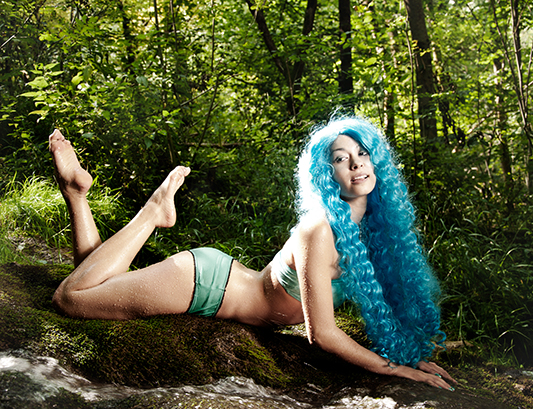 Have you already known that I modeled before I started being a photographer?
There was this time I played a water nymph in a lake and I had to look moony and naive and sit at the lakeshore or flounder about in the water. And I thought to myself: “Omg, I really feel stupid! There must be a way to do this better”. So I did. In Greek and Roman mythology, water nymphs are divine spirits who animate nature. They are usually depicted as beautiful, young maidens who love to dance and sing. As the name implies, they live near lakes, rivers or even the sea. So you can say, they are similar to mermaids, but don’t have a fish tail. And they do not necessarily live in the sea but any kind of water.

If a travelling man is lucky, he sometimes gets the chance to spy on the water nymphs’ dancing or bathing in a stream or pool. So the stories say. This may occur either during the noon heat or in the middle of the night. Of course, peeking at innocent and pure maidens can result in “immoral” behavior…

About the term Nymphomaniac

Due to the depiction of the mythological nymphs as females who mate with men or women freely and without care, the term nymphomaniac is often related to women who are perceived as behaving similarly. It describes an extremely frequent or suddenly increased libido. The modern word for nymphomania is hypersexuality.

My interpretation of a Water Nymph

Water nymphs are cute and innocent – but also playfully sexy. Showing only their innocent, moony side would tell only half the truth. Water nymphs are more than that!
The goal of my photo session was therefore to turn the prevailing water nymph clichés upside down. If you search for “water nymph” or “mermaid”, you mostly find girls sitting or lying around and looking fragile. I wanted my model to look more self-confident. No hair-combing, no looking moony – a photo shooting that shows more aspects of the water nymph’s character. So if you compare it to the usual photos, my story is about a not-so-typical water nymph, who is playing in the woods by the waterfall and the lake, enjoying life and not caring about what the others expect of her. Combing hair and singing – there are better things in life! PS: You may peek but you may not touch!

How do you like my water nymph?
Have you ever taken a shower under a waterfall?
Leave me a comment!