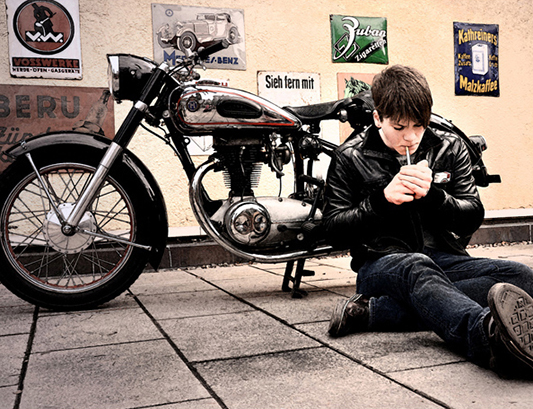 Here we go down that same ol’ road again.
Sympathy unfolds the shell that holds all the beauty within
… sings the band Dredg in the song “Same Ol’ Road”

But what exactly has this to do with the photo shooting other than providing a fitting title? Read more about the name and my modern James Dean in this article!

About the ideas behind “Same Ol’ Road”

It’s about the past – and the future repeating the past. It’s about the human inclination to go the same ol’ roads again and again, believing that all was better back then and forgetting the reasons why the people back then moved forward (it wasn’t really better!) The first shooting took place outside in December 2009 in the old town of Tübingen. With the topic “roads” in mind, I chose narrow alleys, tunnels, stairs and rails. It was shortly before Christmas and we had 260 K ( – 14℃). It took us quite long to visit all the locations that were planned. My model was very cold and we had to regularly warm ourselves up in different shops and other buildings. After the first location, we went to buy 4 pairs of socks because he couldn’t feel his toes anymore! He was very brave. Especially, when he agreed on walking the closed down rails in his t-shirt!

It was almost impossible to hit my camera’s shutter because I couldn’t feel my fingers anymore. But he… he was sacrificing himself for art!

The location was near his apartment though. So we ran as fast as we could and drank a lot of hot tea when we arrived. No model was harmed during the shooting. He is still safe and sound! The second shooting took part in February 2010 when I got the chance to use the rooms and vehicles of the town’s Car and Toy Museum “Boxenstop”. So we gained access to a lot of old and manly stuff like motorbikes and cars. Combined with a leather jacket, cigarettes and whiskey, we invented a modern kind of James Dean, traveling the same ol’ roads once again. (James Dean did auto racings and died in an accident at the age of 24.)

PS: This time, it was mostly warm and comfortable. We only went outside once to take photos of my model in front of the motorbike. Have you heard about James Dean? What do you know?
And what do you think about my retro style photo shooting?
Tell me about it in your comment below!