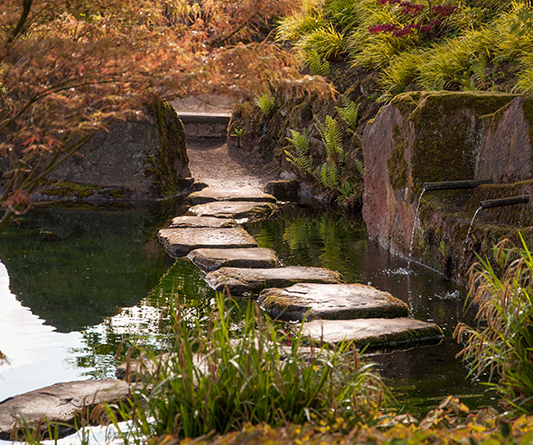 During my trip to Western Germany, I visited the Japanese Garden of Kaiserslautern.
Truth is, I even walked through the park twice the same day!

The reason for going there twice was because I always found something new to take photos of: Stones leading the way through the water, waterfalls, reflections on the surface of the pond and beautiful koi fish. For you to remember Me A Short History of the Japanese Garden

The Japanese Garden of Kaiserslautern is the biggest one in Europe. At the end of the 19th century, the Karcher family had a park laid out in the English style. The family owned the land until 1933/34. But then, Hitler dispossessed the Karchers. During World War II, bombs destroyed the whole park. And it was not until 1993, that some citizens decided to build something new.

Inspired by the gardens they had seen in Tokyo, “The Japanese Garden Association Kaiserslautern” planned this park and opened it for public in the year 2000. Today, you can find four waterfalls and a historic Japanese tea house which is 100 years old. During the World Football Championship in 2006, the Japanese Garden was one of the theater stages for the celebrations. Have you been to Kaiserlautern? During the World Championship?
Did you have the chance to take a walk in the Japanese Garden?
Write a comment below!