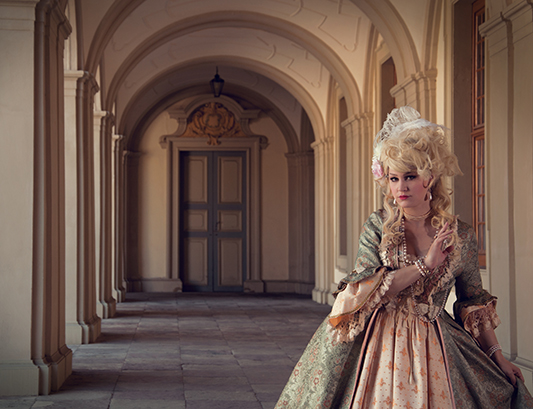 The Baroque is a highly ornate and often extravagant style of architecture, art and music. It flourished in Europe from the early 17th until the late 18th century. The Renaissance, which came before, was calm, steady and clearly defined. Though the Barock used some of its elements, it clearly overdid it and used a lot of curlicues on top. Pomp and dynamic compositions were more important now.

The person with the most colorful personality of this time was probably Marie Antoinette, the last Queen before the French Revolution. During her reign, a growing number of the population eventually came to dislike her, accusing her of being profligate and promiscuous. She later became executed by guillotine on the Place de la Révolution. The widely-known phrase “If the people have no bread, let them eat cake” is often attributed to Marie Antoinette. It is claimed to have occurred during one of the famines in France. Yet there is no evidence she ever uttered it. The phrase did acquire great symbolic importance in subsequent histories when pro-revolutionary historians sought to demonstrate the obliviousness and selfishness of the French upper classes at that time.

The tragic figure of Marie Antoinette

Marie Antoinette is somehow a tragic figure because she suffered a great deal from the rigid rules on the French Court. Certain quotes suggest she probably wanted to break out of the existing order by throwing pompous parties, e.g.:

People think it’s so easy to play the queen, but they’re wrong. Nothing but rules and ceremonial! To be natural is apparently a crime.

The ideas behind “Tragic Kingdom”

In this photo shooting, I wanted to show her widely-known profligate as well as her hidden sad side. I travelled to the castle of Ludwigsburg, one of the best-preserved castles of the Baroque Era in Europe. There, I met with Nathalie, a model whose father is fittingly French. She was very happy about this idea because she loves the movie about Marie Antoinette very much. Gathering all the clothes, accessories and requisites was a lot of work. The dress was hand-crafted by a friend of hers. We used soft pastel shades as make-up to emphasize Marie Antoinette’s naive and fragile character.

It wasn’t easy chasing away all those people who wanted to have a selfie with my model, by the way! One man was especially cheeky. After I let him take one picture, he tried to lure her away to do his own photo shooting. We stopped all such attempts at once. People probably believed she was part of the castle’s staff and hired for walking around in a costume for the enjoyment of all visitors. They were dead wrong!